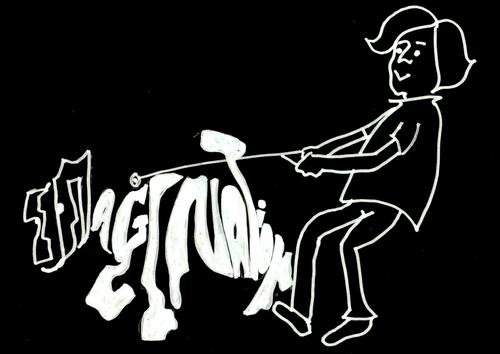 To capture how much the web has evolved picture the first Mosaic or Netscape browser page on a dial up connection. (Sadly I am old enough to have witnessed that first hand). Fast forward to today, a world dominated by ever growing in-browser capabilities on a growing number of ever more mobile devices. The web is not just more mobile and more powerful. It’s a damn lot prettier.  (I cant resist to pimp our Pinterest page here as its so so cool

Design is in many ways at the driving seat of today’s technology. Innovation is increasingly turning outside in rather than inside out. And by that I mean they start from an idealistic interaction with the customer – a dream experience, an imagined world, and we walk backwards to execute on the imagined dream.

Increasingly what defines innovation is that emotional exuberance that our product or service triggers in the user experience. Much like in any step change in technology, the rules of the game in its first phases are mostly utilitarian. Entrepreneurs and innovators feed off the initial invention for years often decades to max out on the enhanced utility that new technology offers. And to do it at scale. There was not much sense of style or design in the Henry Ford’s Model-T.. for which he famously said ‘you can have it in any colour you want, as long as its black’.  The utility in taking you from A to B faster than a horse was the dominant thesis then.

Of course today buying a car is almost entirely a function of that emotional desire, which advertising agencies know only too well if we gauge from the crap Tv commercials we get served (I often found myself wondering what milk chocolate, good looking girls or a picturesque sunset have to do with the quality of car or its drive!)

The web has gone though much the same Journey. Today’s entrepreneurs – or a growing crop of them – design their innovations and the organizations to be led by imagination. The same holds for me and my company – PeoplePerHour.  Although it took me some time to fully appreciate its importance.

Today, in thinking about our product evolution I always first think visually. I imagine the emotion I am trying to trigger in the user journey and walk backward to think through the feature set the product needs to have in order to deliver that.  As Einstein said: “it all starts with imagination”

Not enough businesses operate in this way in my opinion. Too many embrace user-centric design or other forms of ‘design by collective wisdom’. They create products which all end up looking the same. I am a strong anti to these methodologies. I believe they foster a herd mentality and at best have a smooth product but one  that never breaks free from the status quo. You cannot generate step change or achieve big breakthroughs solely by listening to the masses. As Henry Ford put it: if I listened to my customer I would have built a faster horse.

Yet this should not be misread as “the customer doesn’t matter”. No. Imagination and vision should be the things that drive that step change, and feedback and optimization around what the user and your metrics tell you should be the things that then follow to fine-tune that step change.  The higher the step, the more rough the experience around the edges, the more things you are likely to miss. Which is why optimization, user feedback and digging in your leading and lagging metrics is super important. But it should  all starts from imagination.

I recently finished reading Einstein’s biography by Walter Isaacson inspired by the captivating way he told the story of Steve Jobs. I was a big physics geek at school although today I remember very little of it, yet enough to appreciate Einstein’s biography and his genius.

And here’s my biggest take-away from the book. Einstein’s genius was not due to his superior knowledge of physics, or maths (in fact he had his wife check the math in his papers); it wasn’t in his mental processing power either (what we call intelligence). It was that he first imagined things before putting pen to paper. All his great theorems came from thought experiments he performed in his head.  He was as much an artist – if not more – than a scientist. And that’s what set him apart and led him to create step change in every field of physics he touched.

Einstein went against the grain of best practice in Physics. Rather than starting with data, experimentation, observation and empirical deduction to build up his theorems posteriori,  he started by imagining a word we still do not comprehend. And walked backwards from there.   To explain gravity he imagined a ball (earth) rolled on a cloth with a dent in it. The ball curves to the dent. And from that he  imagined  the warping of space time which explains gravity.

OK fair enough that’s a big mental leap. We are not all Einstein’s. But I truly believe there is a lesson  for all of us in the way he approach things. Which is to let our imaginations run wild, to not be afraid of being bold and wacky.   To let science follow up and connect the dots of our imagination and intuition; not the other way around. To being led by our imagination.

The same holds for our generations greatest innovators and inventors. From Thomas Edison who famously kept going despite 10,000 failed attempts to create the light bulb; Steve Jobs  (he famously responded to a customer emails starting with the following “Here’s why you’re an idiot:” …Not enviable behavior but  perhaps the “idiot” was getting in the way of Steve’s imagination conceiving his next breakthrough).

It takes a lot of tenacity, willpower and self-confidence, almost arrogance to brutally and boldly  believe in your own ideas. And to not be afraid to follow them. True: if everyone was like that the world would be a lot less pleasant of a place to live in (for most). But it sure as hell would be more effective.